Located just outside a home I spent 8 years growing up in Lagos, Nigeria were thriving shops that sold parts for cars. The culture integral to the success of these shops was: “connection and settlement.” Let me explain. An entrepreneur, sensing a need to open up a new shop, since he has outgrown his old shop, would travel to the rural cities and hire someone. This new hire (protege) would live with the entrepreneur, learn the ropes of the trade and serve faithfully. When the new hire becomes competent at the trade, the entrepreneur would then open up a new shop for him (new hire) to manage. After about 5 years of successfully running a shop and repatriating the profits back to the entrepreneur, the new hire will then get the shop to keep as his own. This is called a settlement. Because the new hire stayed connected to the entrepreneur, he got the settlement of having his own store. The new hire can now hire his own protege and propagate this enduring culture of “connection and settlement.”

Elisha served Elijah faithfully. He stayed connected. When others, even Elijah himself, asked him to turn back, Elisha refused. He wasn’t going to break his connection prematurely. When it was time for Elijah, to be taken up to heaven, Elisha was settled with a double portion of Elijah’s anointing – because he stayed connected. Elisha didn’t need to beg for it, he had earned it by learning the ropes, and serving faithfully. He asked and he received a recompense for staying connected. This is in stark contrast with Gehazi (Elisha’s servant), who tried to get a settlement from Naaman (to which he had no connection). Gehazi instead of getting the settlement of a thriving ministry from Elisha, received a settlement of leprosy from Naaman. 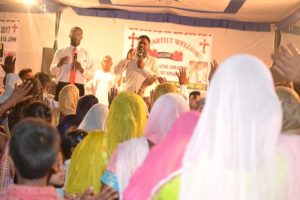 The Right Connection Leads to the Right Settlement

But the God of all grace, who hath called us unto his eternal glory by Christ Jesus, after that ye have suffered a while, make you perfect, stablish, strengthen, SETTLE you – 1 Peter 5:10